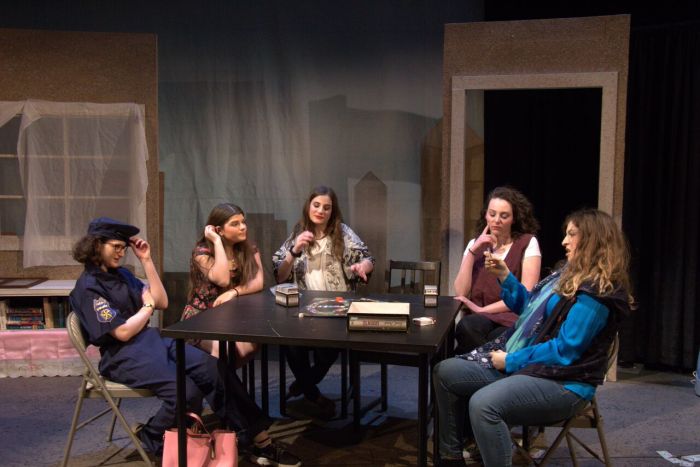 You have heard the old saying “opposites attract” … Well believe it or not, this theory is not always true. Especially when talking about divorcèes, Olive Madison and Florence Unger. Jack M. Barrack Hebrew Academy had the audience belly laughing to their interpretation of Neil Simon’s The Odd Couple (Femal Version). The show details two recently divorced women and their experiences of living together. With one being content with living in a pigsty and the other obsessed with cleanliness, the two face many challenges related to their incompatibility.

Olive Madison (Rivkah Wyner) is a rather outgoing woman who possesses the qualities of a slob seeing as her apartment floor is covered in clothes, food and everything in between. Florence Unger (Sabrina Chevlin) is the exact opposite. Flo is far more introverted and can be categorized as a neat freak. Wyner and Chevlin highlighted the striking differences in their characters impressively. Their use of physical comedy was especially notable and well executed.

Mickey (Ruthie Davis), Renee (Gavi Weitzman), Vera (Ruthie Cohen), and Sylvie (Sarah Eckstein-Indik) are a humorous bunch who partake in ladies’ night at Olive’s house with a bottle of liquor and an excess of man problems. The aspect that made this group so relatable was their well-developed chemistry. Each woman brought a distinct personality to the Trivial Pursuit game, carrying its own sense of humor.

Manolo Costazuela (Jack Zweben) and Jesus Costazuela (Zach Sherman) are two brothers who end up on a double date with Olive and Florence. Zweben and Sherman utilized their stage time in a clever manner. They acted together as a synchronized and humorous pair incredibly well.

Student director, Yonah Hamermesh, comprised a simply wonderful put-together show. The stage manager (Sophia Shapiro) and assistant stage manager (Sarah Nelson) appeared to be efficient and organized, seeing as timing was excellent and there didn’t appear to be any unplanned mishaps. The few sound effects (Charlie Foster and Sophia Shapiro) were on time and appropriate to the scene. Costume, hair and makeup (Orli Friedman, Sarah Nelson, Maya Pur) were always fitting to the character’s personality and functional.

Yonah Hamermesh wrote in her director’s notes for the show that she wanted to do this show “because of its powerful message of gender equality and the power of women that is constantly suppressed in modern society.” Olive and Florence taught us “that anyone can be strong, independent, and beautiful”.

Ever heard the expression “opposites attract”? The validity of that statement really hinges on the circumstances. When disorderly woman who is rather disorderly lives with a meticulous neat freak, there is bound to be discord. There is something very amusing and relatable about two distinctly different roommates trying to live cordially under the same roof. Barrack Hebrew Academy’s Take on The Odd Couple (Female Version) kept each audience member anticipating a laugh.

The Odd Couple, written be Neil Simon, premiered on Broadway in 1965. Off of the play branched several derived works, including the 1970’s sitcom of the same title. In 1985, the play was featured on Broadway again, only revised to fit a female cast. This version surrounds two women named Florence Ungar and Olive Madison. Olive is living single and carelessly while Florence is in despair over her separation from her husband. Though slightly apprehensive, Olive invites Florence to live with her. Their conflicting personalities and banter serve as the main comical components throughout the show.

Barrack Hebrew Academy did a wonderful job at capturing the true atmosphere of the show; the actors portrayed the roles with an authenticity that made the plot believable. An actress that most definitely deserves mention is Sabrina Chevlin. Sabrina gave depth to Florence’s character in her raw emotion and body language. Her awareness of the character’s mindset was always apparent. Olive’s disposition was brought out effectively as well; Rivkah Wyner gave a solid and consistent performance. Characterization was strong throughout the cast.

I enjoyed the prop, costume, and set choices. They were realistic yet they were not underdone. The actors used the space effectively. The lighting was appropriate and did not distract from the audience. The choice of a subtle light cast over the table as it was being set allowed an additional comedic aspect. One critique that I would have is about the use of sound effects. They occasionally broke the mood and authenticity of the production.

Overall, I enjoyed the show and was very impressed considering that it was student directed. I commend all contributors for adding several creative elements.