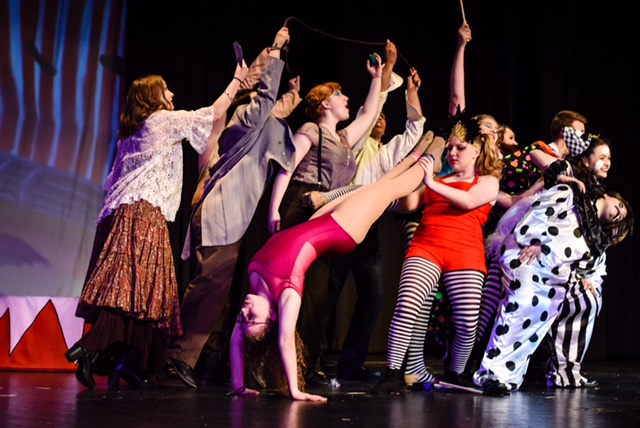 Daniel Wallace wrote the novel Big Fish in 1998 before Tim Burton adapted the story into a movie in 2003. Big Fish eventually opened on Broadway in 2013. The musical explores the relationship between Edward Bloom and his son, Will, as he searches for the truth between his father’s outlandish tales and mysterious past.

Gianni Recupero, as Edward Bloom, demonstrated tremendous skill and control on stage. Recupero successfully developed a complex array of emotions as he handled his character’s intense trajectory throughout the show. Playing Edward Bloom’s wife, Taylor Mitchell displayed maturity and poise well beyond her years. Mitchell’s perfectly crafted southern accent and powerful vocals stood out in every scene she appeared. Recupero and Mitchell complimented each other beautifully, especially in the romantic numbers “Time Stops” and “Daffodils.”

Connor Hopkins, as Will Bloom, equally excelled in his performance. The emotional solo number “Stranger” specifically highlighted Hopkins’ vocal and acting abilities as he sang in his upper register. Other stellar performances included Evan Byrne as Amos Lee, the eccentric circus ringleader, Natalie Kim as Jenny Hill, Edward’s high school sweetheart, and Nicholas Ferrara as Karl the Giant. Ferrara’s performance was especially remarkable as he walked, ran, and danced all while wearing stilts.

The production’s ensemble brought another level of energy to the show. In every number the ensemble members appeared in, they all portrayed a uniquely autonomous persona while still maintaining clarity as a group. The Alabama Lamb ensemble, in particular, did an exceptional job; even though the number was fairly simple, the group sang and danced together in a lovely way.

Students designed and built all of the sets for this production. The sets consisted of a bedroom and a basement set on both ends of the apron respectively, as well as changing projections on a scrim upstage. The beautifully detailed projections enhanced each scene they were used in as they created more depth on stage. The student-made props definitely left something to be desired, but this did not hurt the overall production.

Ultimately, Central Bucks High School West’s production of Big Fish taught the audience that sometimes it is okay to indulge in the fanciful.

Overflowing with love and humor, Central Bucks High School West’s production of Big Fish left the audience with an experience that was richer and “bigger than life” itself!

Based on the novel by Daniel Wallace, Big Fish centers on the life of the eccentric Edward Bloom, whose impossible adventurous stories of witches, giants, mermaids and werewolves frustrate his son, Will. Will, about to have a son of his own, is determined to find out the truth behind these stories.

Central Bucks West’s cast showed great enthusiasm on stage. The talented cast was filled with skillful dancers, especially in numbers like “Red, White, & True.” The Alabama Lambs presented great harmonies and eye-catching choreography in the number, “Little Lamb from Alabama.” Despite a lack of articulation in a few of the songs, the cast was packed with energy and passion.

Gianni Recupero’s rendition of Edward Bloom was splendid, as his confidence and animation throughout the show perfectly fit his character. Recupero portrayed a great father-and-son chemistry with Will, played by Connor Hopkins. Sandra Bloom, Will’s wife, played by Taylor Mitchell, lit up the stage with her smile and her believable country accent. Her sweet, yet powerful voice was showcased in her solo, “I Don’t Need a Roof,” which was not only inspirational and moving, but wonderfully sung. Also, Jenny Hill, Edward’s first girlfriend in high school, played by Natalie Kim, showed great emotion on stage, and was one of the most powerful actresses in the show.

The fairy tale characters, especially the Witch, played by Angela Gibbons, had dynamic body language that perfectly suited her mystical character. Nicholas Ferrara’s rendition of Karl the Giant, was an adept on the stilts, and added even more humor and lightness to the show.

Central Bucks West’s crew did an appreciable job with swift scene changes. A screen, with a projector used to change the background, immediately set the mood for the next scene, without any hassle. The crew showed that you can never have too much glitter in the song, “Daffodils.” The crew had great dedication with the show’s visual appeal, aiding the fluidity of the show very well.

Central Bucks High School West’s production of Big Fish was not only humorous and fun, it presented a deep emotional aspect which left the audience without a dry eye.