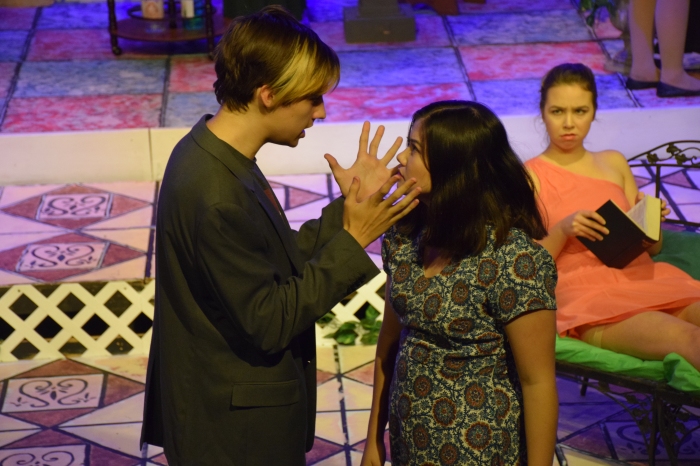 Much Ado About Nothing by the Baldwin School in Bryn Mawr, PA

Perhaps the essence of a great Shakespeare comedy is one that leaves the audience with a sense of ridiculousness; the ridiculousness of life, of love, of gossip, and above all, of human nature. Baldwin School’s Much Ado About Nothing captured this ridiculousness perfectly, bringing to the stage a playful, well-acted and heartwarming performance.

Romantic leads Benedick (Lionel McCulloch) and Beatrice (Melia Haggino) are dead-set against ever falling victim to such a debasing sentiment as love, until their friends decide to play matchmaker and spread rumors that the two have fallen for each other. Meanwhile, Claudio (David Zachai) woos Hero (Katrina Conklin) and Don John (Ashley Tate) does his utmost to cause trouble for their upcoming marriage. In the end, the day is saved by the Watch, a bumbling gang of misfits led by the idiotic but lovable Dogberry (Alexis McCall).

The show’s physical comedy was its greatest attribute, marvelously timed and frequently hilarious, bringing life to scenes of dialogue while keeping their rhythm flowing smoothly. Shakespeare’s dialogue is incredibly difficult to pull off, especially in a high school environment, but actors displayed a professional-tier mastery of the wordcraft. A slideshow above the set provided periodic summaries of what was happening onstage, but this addition appeared not to give the cast enough credit; the lines were delivered with a clarity that rendered it unnecessary. The actors looked completely comfortable in their roles, making the show’s characters pop onstage. Many girls were tasked with playing boy’s parts, which they did superbly; an especially stand-out performance being Emily Thompson as Hero’s father Leonato. Other stand-out performances included Benedick and Beatrice, who could have performed the show alone with the amount of energy and passion they brought to the stage, and the Watch, especially Dogberry, whose comedic relief never failed to elicit uproarious laughter.

The sound choices (designed by Lionel McCulloch and Isabelle Aldrete) and costuming choices (by Alexis McCall, Audrey Senior, and Skylar Zachian) were mostly timeless, bringing the story out of a strictly period aesthetic and into a more universal one. The sets (by Alyssa Morales and the Advanced Acting Class) and lighting cues (by Rebecca Resnick), though simple, were effective, and the use of shadow at points, for instance, to cast darkness on Don John’s face when he is plotting treachery, was a small choice, but interesting. Overall the technical aspects of the show supplemented the performances in an excellent way.

Performing Shakespeare is a daunting task for anyone, old or young, and the Baldwin School production of Much Ado About Nothing succeeded with flying colors. It was believable, it was engaging, and, as is always most important in a comedy, it was wonderfully funny.

Lovers, villains, and a rag-tag crew of neighborhood watchman? Much Ado About Nothing at the Baldwin School certainly was something!

This acclaimed play is one of Shakespeare’s most popular works. Two couples, Benedick and Beatrice and Hero and Claudio face the consequences of gossip and trickery as they prepare for the latter’s wedding. Written around 1598, the show has seen its fair share of stage and film adaptations.

The Baldwin Maskers had their own spin for this timeless show.  In homage of that concept, the show was staged without a definitive time period.  Instead elements of modern day culture and conveniences melded with the aged language and customs prominent in the story.  Additionally, a projection screen provided a synopsis for the audience in an effort to translate the difficult Shakespearean dialogue.  While the intention of both these ideas were clear and appreciated, the execution lacked cohesion and provided some distraction.

Contrastingly, Melia Haggino (Beatrice) was enrapturing.  She commanded the stage with grace and wit, while showing an excellent grasp of the complex language.  Equaling her in presence and humor, Lionel McCulloch shined as Benedick.  Starting as sworn enemies, the pair showed dynamic range as they shifted from biting remarks to loving sentiments.

The ensemble cast served as a support for the entire show.  Crucial to its success, they incorporated hilarious moments of physical comedy which enhanced the energy of the production.  Notable performances include those of Kate Park and Alexis McCall.  McCall, as the endearingly bumbling Dogberry, headed the motley neighborhood watch, an enthusiastic group that commendably committed themselves to each character and their group as a whole.

Tech and design elements are essential to the believability of a story. A stand out addition, Alyssa Morales and the Advanced Acting Class designed the wonderful set.  Incorporating distinctly Shakespearean elements with modern additions, the stage felt simultaneously grand and inviting.  Coupled with lighting by Rebecca Resnick, the mood of each scene was effectively conveyed.

An all-around engaging and impressive production, the Maskers delivered hysterical comedy and heartbreaking sadness with ease and ability. So, “sigh no more,” but give a huge round of applause to the cast and crew at Baldwin.