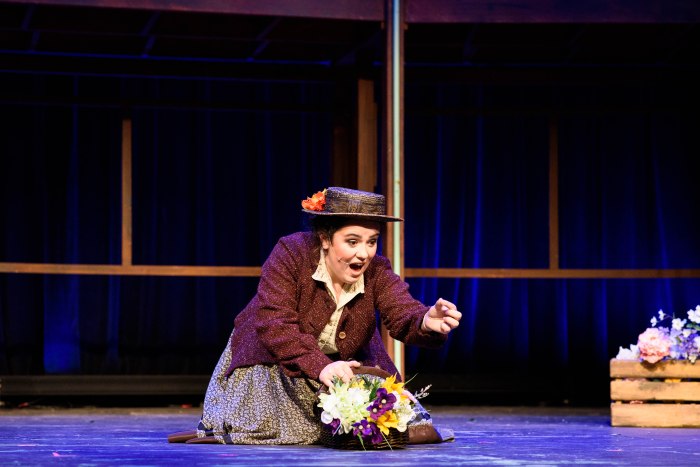 Review submitted by Anji Cooper of Academy of the New Church

“Wouldn’t It Be Loverly” to see an utterly captivating show full of humor, talented actors and catchy tunes? Well, you’re in luck because Springside Chestnut Hill’s production of My Fair Lady is all that and more.

Based on George Bernard Shaw’s Pygmalion, My Fair Lady is a musical that follows Eliza Doolittle as she becomes the subject of a misogynistic and condescending phonetic professor’s bet that he can turn a lowly flower girl into a lady presentable in high society. The musical’s 1956 Broadway production set the record for the longest run of any show on Broadway up to that time. Soon after, the musical was adapted to a film starring Audrey Hepburn and Rex Harrison, which won numerous awards.

Eliza Doolittle (Gracie Lubisky) led the show with charisma and charm. Throughout the performance, Lubisky demonstrated both her beautiful voice and excellent comedic timing. Her transition from a Cockney accent to that of an upper-class lady was impeccable. Sean Terrey skillfully portrayed the ever-patronizing Henry Higgins. He exhibited outstanding acting prowess, commanding the audience’s attention even when having no spoken dialog. Not only was his accent flawless for the entirety of the show, but he also exhibited an excellent ability to express his character’s feelings.

The entire cast was engaging and energetic. Stevie Mack, who played Freddy Eynsford-Hill, especially stood out with his melodic voice and passionate emoting during his song “On The Street Where You Live.” He seemed comfortable while performing on stage in front of the curtain without any set at all. Both Alfred Doolittle (Jack Walker) and Mrs. Higgins (Emma Yeatman) soon became crowd favorites with their humorous performances. Walker’s stumbling, mock-inebriated dances often had the crowd in stitches, while Yeatman’s unceasing jabs towards her son never failed to draw laughter from the audience.

The production’s lighting complimented each scene’s mood, while also doing well to convey the location and time of day. Though some set changes could have been done with a bit more urgency, overall the stage crew did well to effectively move the production’s various props and set.

Springside Chestnut Hill’s My Fair Lady won its audience’s heart while bringing the beloved story to life with its talented actors, engaging ensemble, and constant energy.

Springside Chestnut Hill Academy helped to transfer audiences back to Edwardian London in its ‘loverly’ production of Frederick Loewe and Alan Jay Lerner’s My Fair Lady.

Originally produced on Broadway in 1956, My Fair Lady is considered one of the greatest modern musicals ever put on stage. The story follows linguist Henry Higgins as he attempts to transform Cockney Londoner Eliza Doolittle into a proper lady in a sort of social experiment. Although ultimately successful, there are a great deal of hurdles along the way, many of which are reminiscent of some divisive class- and sex-based issues we see today. Although there were some minor issues with diction, the cast did a good job, and was incredibly consistent when it came to their various Anglo-centric accents.

Glistening throughout the entire production with his portrayal of Professor Henry Higgins, Sean Terrey absolutely nailed the famed leading role. Clearly a versatile actor, Terrey was able to seamlessly handles both comedic and serious aspects of the role. Opposite him was Gracie Lubisky as flower-girl-turned-lady Eliza Doolittle. She does a first-rate job switching between lower and upper-class accents, truly giving the illusion to the audience that her voice is progressing. Aside from that, her pretty voice tackled the songs in a more than effective way.

Aside from the leads, Emma Yeatman was a standout member of the cast, seen playing Henry Higgins’ mother, Mrs. Higgins. A fairly comedic role, Yeatman’s timing and delivery suited the role well. Additionally, Earl Patterson provided a more than adequate portrayal of Colonel Pickering, another linguist who stays with Henry Higgins and is a frequent voice throughout the show. Also worth mentioning is Jack Walker’s performance as Alfred P. Doolittle, father of Eliza.

Despite working in a less-than-traditional auditorium, the Springside Chestnut Hill Players worked well with their facility. Hadley Sagar and the rest of the lighting crew were strong when it came to blending both conventional and LED fixtures to create distinct washes that reflected changes in mood and location. The crew also did a good job when it came to set changes, as they were executed quite smoothly. All in all, crew held their own during the show.

My Fair Lady was an enjoyable production, even promoting a standing ovation from much of the audience at its conclusion. Charming by nature, the production held together well, while displaying a few strong performers along the way. 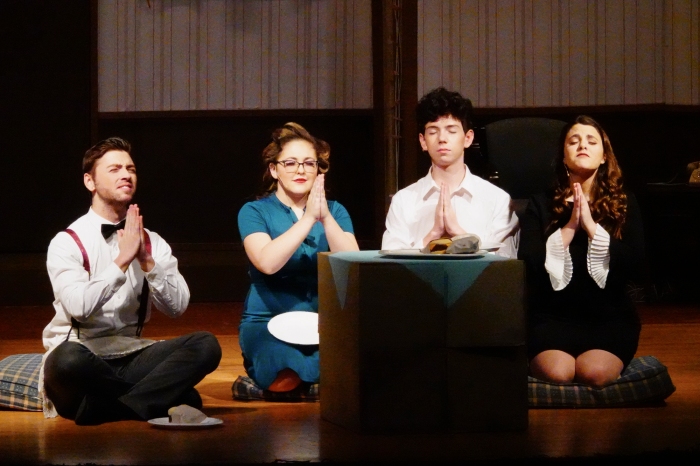 Out of the Frying Pan by Interboro High School in Prospect Park, PA

Three women. Three men. One apartment. Murder. These ingredients are a recipe for disaster. In Out of the Frying Pan, Interboro High School skillfully combined them all with hilarious consequences.

The 1941 comedy by Francis Swann showcases the struggles of young actors striving to succeed in the entertainment industry. Since fierce competition prevents them from landing jobs, six prospective performers share one brownstone. As they attend countless auditions, toil through low-paying jobs, and spy on the producer downstairs through a hole in the floor, the roommates develop a compelling friendship. When they stage a murder for the Broadway executive, everything goes haywire.

Together, Interboro’s ensemble crafted a convincing camaraderie. Buzzing with energy, the actors humorously portrayed the lively atmosphere of a shared apartment. Frantically scurrying to hide evidence and motioning secretly to each other in the background, the versatile group added details to each scene, even if they were not the main focus. Simple but well-executed, technical aspects effectively framed the story.

The elderly landlady, Rachel Suga (Mrs. Garnet), stood out with her over-the-top acting and unique character voice, eliciting laughs as she extraordinarily misunderstood almost every situation. Unfortunately victim to her shameless flirtation, producer Amir Herradi (Arthur Kenny), was also a standout. The aloof executive naturally transitioned from sardonic to sympathetic. Dottie’s friend, Franchesca Parker (Muriel Foster) surprised many with her physical acting. Intoxicated, she realistically stumbled across the stage. Overall, comedic timing was excellent, though some jokes were lost due to poor delivery. But as the play carried on, the actors relaxed and improved their performance, letting their chemistry shine.

Adding even more details to the cast’s characterization, Interboro Hair and Makeup Crew gave each of the actors their own distinctive look. From Kate’s bold lip to Dottie’s natural makeup to Garnett’s bright blue eyeshadow, appearances matched each individual’s charm. Courtney Floyd, Gharrett Marr, and company swiftly set the stage for each scene. The Interboro Sound Crew timed mics just as gracefully. While lighting changes were minimal, Interboro, EnLIGHTened executed them with poise.

The play may have been “Mostly Murder,” but the cast and crew brought much more to the table. Interboro High School’s production of Out of the Frying Pan was a captivating comedy.

The cast and crew of Interboro High School’s recent performance of Out of The Frying Pan was on fire!

The show revolves around six aspiring actors, who live together in New York City in the 1940s. They live above a big-name Broadway producer, and try everything to get him into their apartment to watch them perform, and to hopefully get their big breaks. Hilarity ensues when friends come to visit, rent is due, and romances form, making all three acts impossible to forget!

Overall, the production was very well done. The cast had great energy throughout the entire play, and it never wavered once. The main cast had amazing chemistry, especially Ryan McGinley, who played Tony, and Malin DiGuglielmo, who played Marge. Their secret marriage felt real, and when the two were together on-stage, the audience was transfixed. On a similar note, Daniel Previti, who portrayed Norman, and Aryonna Orth, who played Dottie, showed the sweet side of hiding their true feelings for each other. All six of the apartment group felt incredibly believable, and the audience truly was transported to New York City.

The supporting cast was not to be missed, either. Franchesca Parker (Muriel) played the adorable best friend of Dottie who drops in for a visit. Her use of physical comedy throughout the second act made the audience shriek with laughter, and she had great chemistry with Rachel Suga (Mrs. Garnet), who had the audience in stitches. Suga’s incredible comedic timing in every scene created an atmosphere of comedy that every actor on stage benefitted from. Finally, Amir Herradi’s portrayal of the big-shot producer Mr. Kenny was terrific. His ramblings about how to make various dishes, especially his gumbo, were convincing and thoroughly entertaining.

From a technical point of view, Out of The Frying Pan was fantastic. The Interboro EnLIGHTened crew never missed a cue, keeping the lighting consistent. Coupled with the sound crew’s mastery of the microphones, the audience never missed a beat of the fast-paced show.

Make sure that you make your way into the audience, because Out of The Frying Pan at Interboro High School is not one to miss!