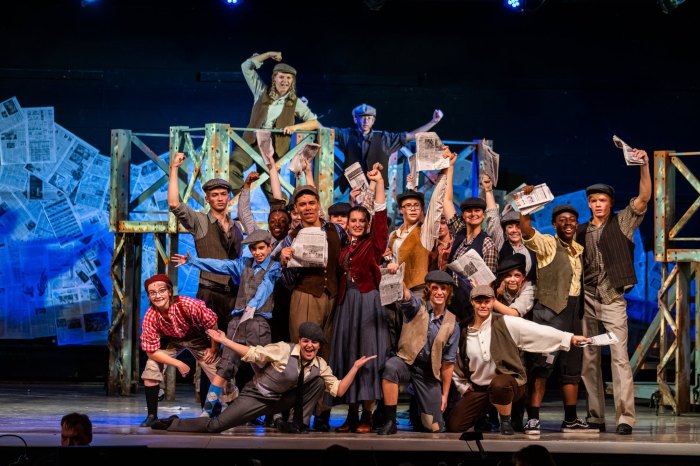 Extra! Extra! Read all about it! This weekend, a ragtag group of ragamuffins from Dock Mennonite Academy took on the kingmakers of New York!

If you haven’t already guessed, Dock Mennonite delivered their rendition of the classic characters and songs from Newsies, a 2012 musical based on the movie of the same name. Underneath the show’s catchy songs and witty banter runs a dark undercurrent of child exploitation as it chronicles the Newsboys Strike of 1899. Led by Jack Kelly, an orphaned dreamer turned revolutionary with an artistic streak, the Manhattan “Newsies” fight to improve the working conditions of all the newsboys in New York.

Early on in the show, Crutchie remarks to Jack “I don’t need folks, I got friends.” This remark perfectly captures what made Dock Mennonite’s production so entertaining. The Newsies’ energy and chemistry were palpable, forcing the audience to become invested in their cause.

Miguel Santiago starred as the tough yet secretly vulnerable Jack, tackling the role’s demanding vocal, dance, and dialect requirements with ease. His vocal prowess was especially apparent in the recurring song “Santa Fe.” Greta Schrag’s performance as the resourceful Katherine was also impressive. “Watch What Happens” is one of the most difficult songs for any actress to sing, and Schrag powered through it without stumbling over any of its fast-paced lyrics.

Ruth Michel was a standout among the supporting cast, perfectly portraying the character of the cerebral Davey. Her vocals were also consistently impressive despite the songs being below her normal register. Debi Boerner tugged at the audience’s heartstrings as the optimistic Crutchie, and stole the show with her heartfelt rendition of “Letter from the Refuge.” Although the cast’s vocals and characterizations sometimes faltered during big musical numbers, this is more than forgivable given the show’s difficult and unique style of dance.

The technical star of the show was the student-choreographed “Once and For All,” which created an intricate network of newspaper tossing. The lighting was simple but effective, drawing attention to scene changes and solos.

With infectious optimism, ambitious choreography, and enthusiastic vocals, Dock Mennonite Academy’s production of Newsies paid tribute to the bravery of the real newsboys that the show is based on, reminding the audience that if you keep your “eyes on the stars and feet on the ground,” there’s nothing you can’t accomplish.

“Watch What Happens” when Dock Mennonite Academy brings the story of the New York Newsies to life onstage!

This tale of courage, camaraderie and heart, Newsies was inspired by the Newsboys’ Strike of 1899 and composed by Alan Menken. “Newsies”, or Newspaper boys,  Jack Kelly and Davey Jacobs organize a strike to protest Joseph Pulitzer’s unjust rise in prices of newspapers for the newsboys to sell. With the assistance of up-and-coming reporter, Katherine, the Newsies face off against the all-powerful owners of the newspapers themselves. While the group faces obstacles, they never fail to stand up for one another and persevere!

Dock Mennonite crafted a performance that radiated so much hard work and care from all of the cast and crew, but the cohesion of the ensemble really made it stand out! Every large group number was accompanied by understated choreography, performed perfectly in sync, and outstanding harmonies. In addition, “Once and for All” was choreographed completely by students and the forethought and creativity they put into this number paid off in spades!

Miguel Santiago (Jack) showcased his classic ballet training at every opportunity, led the cast with enormous success, and displayed a very wide and impressive vocal range throughout each challenging song. In addition, Greta Schrag (Katherine) made every scene she was in memorable with her lovely voice and passionate stage presence.

Ruth Michel (Davey) “Seized the Day” by delivering a very convincing and genuine performance, as well as being the vocal highlight of each song she was featured in. Furthermore, Carlie Cocco (Medda) made the show come alive with a very heartfelt and energetic rendition of “That’s Rich.” Finally, the Newsies Featured Dancers elevated each dance break into a lively and fun experience!

Stage Manager Dalton Moore tackled a very ambitious show with skill and talent. For the most part, the vocal power was amplified very well by Sound Mixer Maggie Dowell. While there were instances of the music overpowering the vocals, the actors always recovered quickly thereafter.

All in all, this performance was consistently “Something to Believe In.” Electric choreography, beautiful vocals, and a wonderful story came together to produce an extraordinary performance.